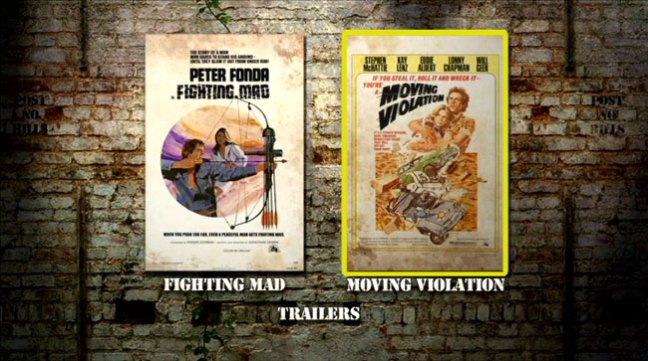 For the past few weeks things have been kinda crazy around here. Thanks to a procedure our cat had, the kids couldn’t be in the same house as him for a while so we switched places with my folks (everyone’s aces now). That lead directly into a trip up to New Hampshire to see my wife’s parents and also attend her best friend’s wedding. In other words, I haven’t had much time to sit around and watch movies. Since I’ve got one day working from home this week with the kids gone, I figured I’d make good use of it and check out a double feature!

I didn’t have to look far as my good pal Rickey passed me a stack of movies the last time I saw him that included Shout Factory’s Action-Packed Double Feature: Fighting Mad and Moving Violations DVD! All I knew about the films going in is what’s on the cover (basically the two posters you see above) and they both wound up being pretty damn good!

Taking my cues from the DVD menu, I started off with Fighting Mad. I had no idea that this 1976 film was not only produced by Roger Corman, but written and directed by Silence Of The Lambs‘ Jonathan Demme. I believe it’s actually his third feature (and followed Bloody Mama which I HATED when I saw it years ago) and you can see some of the precise techniques that would make that thriller so stellar.

Contrary to the poster here on the left, this film stars Peter Fonda as a dad returning to the farm he grew up on with his son. Once there, he discovers that a big time mining operation will do anything to get the land nearby, including brutally murdering Fonda’s brother and pregnant wife.

From there it’s a kind of Billy Jack/Walking Tall/Road House scenario as Fonda, the little guy, stands up against the evil company man, who in this case is actually very, seriously evil. Fonda gives a somewhat removed performance, but you could chalk that up to the loss he suffers early on. Or maybe it’s because his girlfriend gives him shit for being out of it after his brother was murdered and everyone buys that story that it was a drunk driving accident.

Everyone else really seemed to give it their all. I wouldn’t be surprised if they just drove around the shooting locations and found back country locals to round out the cast, because it had a very real feel to it that helped make this story all the more convincing. I mean, when the old lady has to leash her dog and leave her house right before the truck knocks it over, that felt real in every way.

As an added bonus you get one of my favorite things in these kinds of movies, the assault on a mansion at the very end. This tradition carried over from these 70s revenge films into the action/action-comedy/thrillers of the 80s including the aforementioned Road House and Beverly Hills Cop. I’m not much of a class warrior, but it does a part of my heart good to see jerks in mansions get their comeuppance!

Overall, Fighting Mad is a great example of the revenge films of this era and has the bonus of featuring not only Demme’s burgeoning brilliance, but also Fonda’s presence. It’s definitely more of a serious take on the subgenre (not quite as intense as Death Wish) and not necessarily a fun one to watch, but ultimately you can’t help rooting for Fonda to wreck shop on the bad guys at the end.

Moving Violations is mostly a very different kind of movie, except for the very ending. In this Corman-produced 1976 film, a Detroit drifter played by Stephen McHattie (who I just saw in Death Valley!) wanders into a small southern town, becomes smitten with Cam (Kay Lenz of House and The Initiation Of Sarah fame) and they decide to get frisky in the yard of a mansion where the sheriff kills one of his deputies. They run off, chased by the sheriff and get embroiled in something they had nothing to do with as the sheriff realizes he’s got the perfect patsies.

From there it’s a fairly rollicking chase film where the wildly cool and charismatic McHattie fuels part of the operation as he refuses to take Cam’s advice to stop and turn themselves in. She does an equally amazing job of slowly realizing just how dangerous of a situation they’re really in. You really feel like they might be in a hopeless situation, but that McHattie’s not necessarily concerned with hope.

Eventually they find a lawyer they can trust played by Green Acres star Eddie Albert and everything seems like it might be okay. Then the very end of the movie definitely gets more serious in a kind of The Gauntlet/16 Blocks/First Blood sense that definitely plays with the overall tone of the film, but is totally earned thanks to Lenz’s nuanced performance and the coldness McHattie brings to the table. In other words, these shifts felt a lot more earned than in Sugarland Express, another film I didn’t like.

I realized after watching Moving Violations that it reminded me of Hi-Riders. Though the two films look very different, they both deal with societal outsiders trying to live their lives as they want and coming up against more established aspects of society. While on those journeys the characters experience the highs and lows of life which can be as tear-worthy as it is laugh-inducing, as fun as it is sad.

If you’re a fan of 70s action flicks that revolve around revenge and cars, then I can’t recommend this set enough. I also suggest going with the order presented on the Shout Factory DVD because you start with a more simple, but serious film and then move on to something that, I imagine, would be a lot more complete and crowd pleasing.